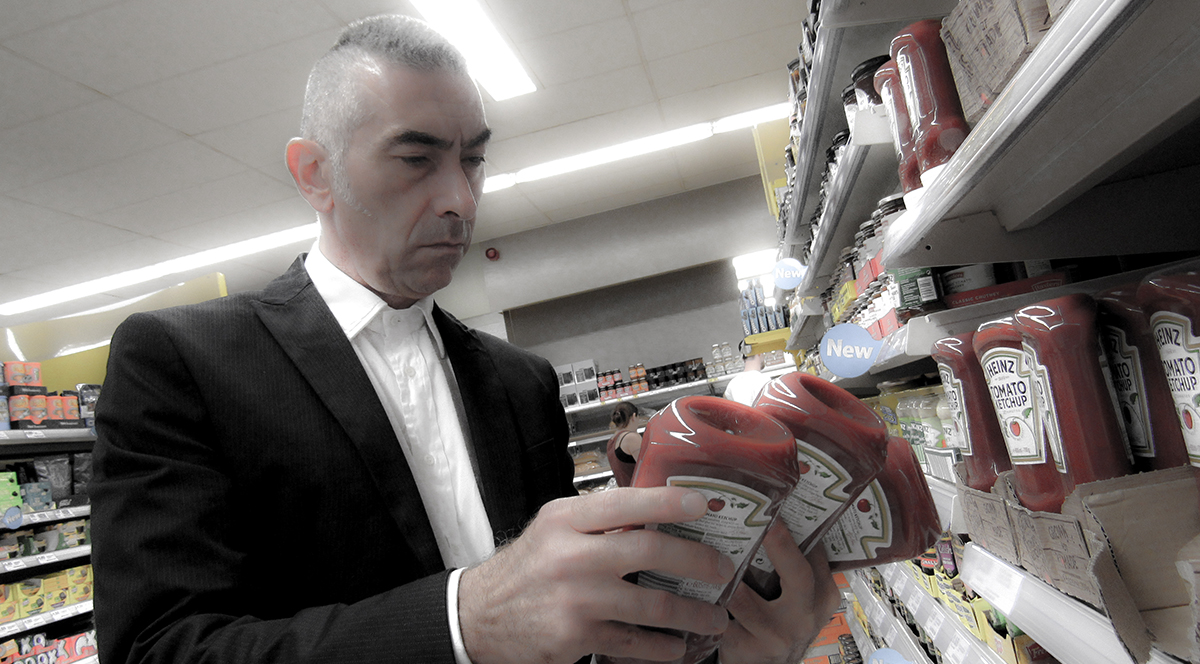 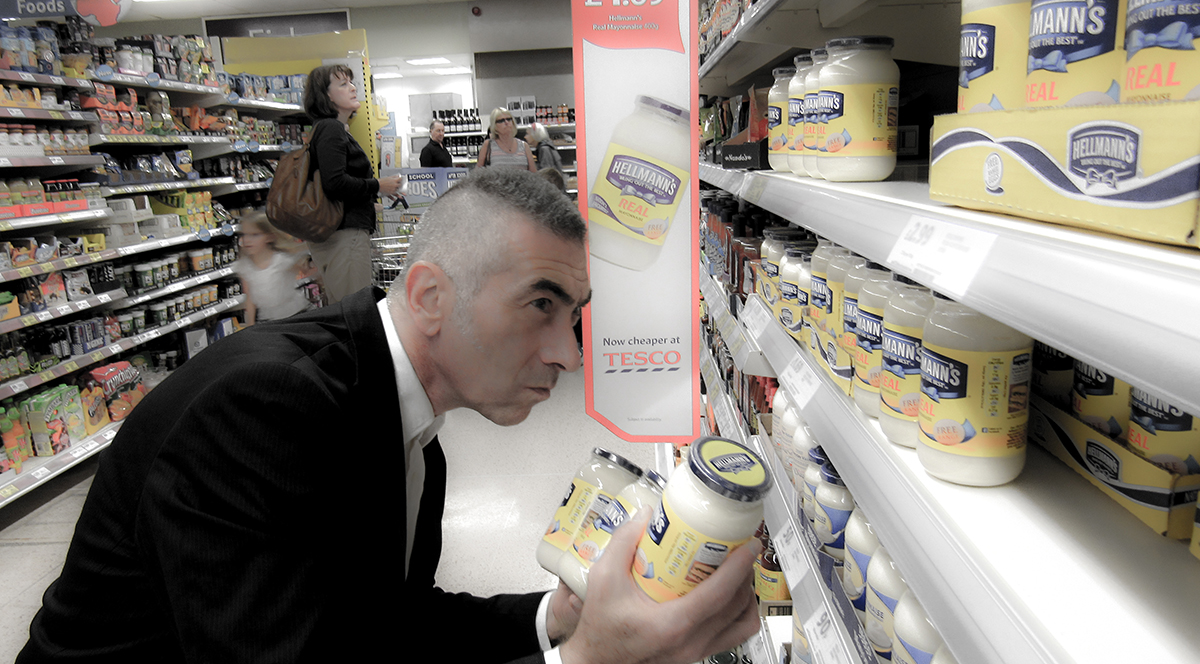 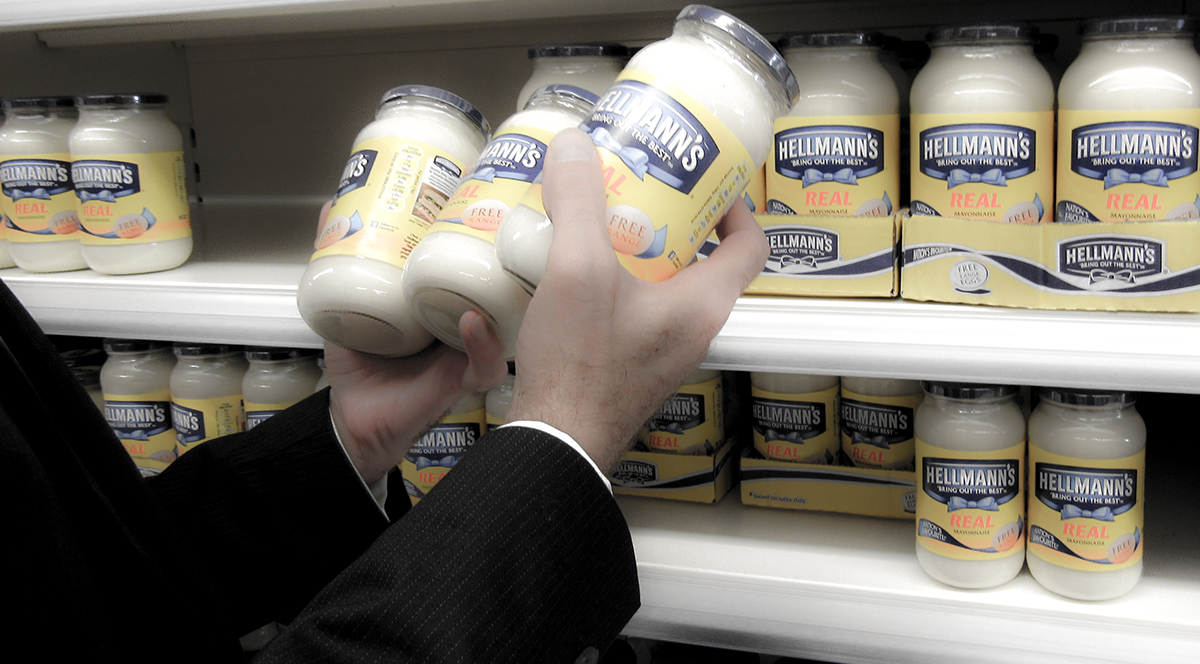 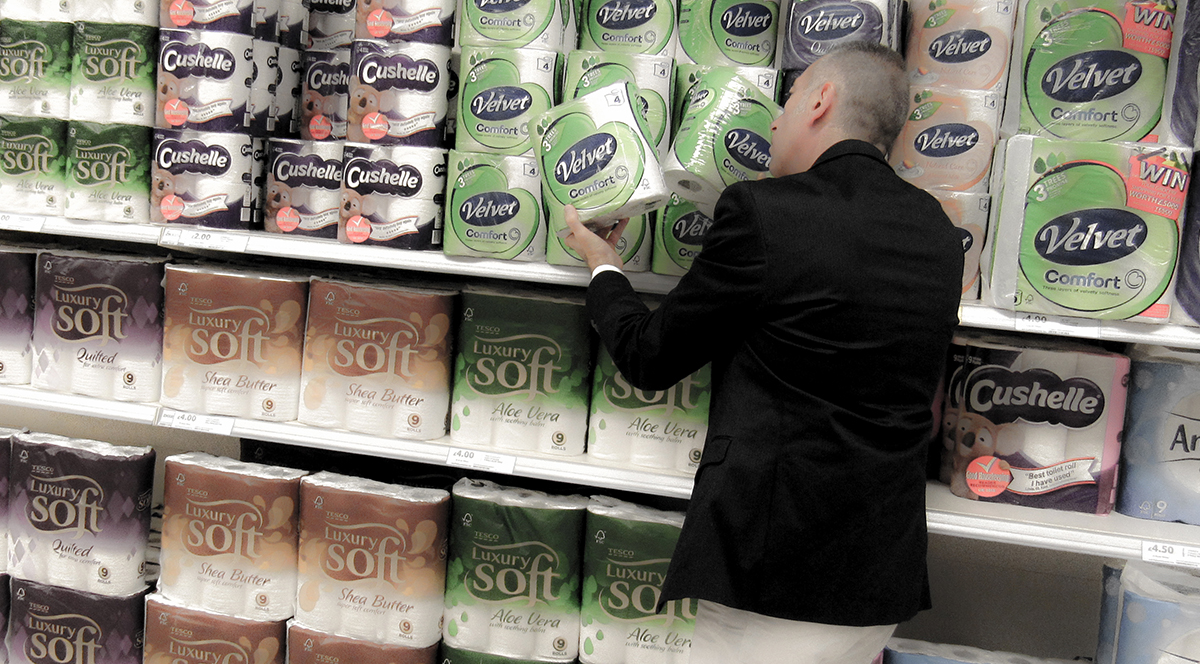 art of choosing
performance / activity
performed at Tesco Stevenage, UK, 17 September 2015
Duchamp declared that what an artist does is “choose,” an insight eloquently restated in his readymades which, among other things, elevated the act of choosing to the very essence of artistic practice. This work outlines a strategy for putting Duchamp’s pronouncement into practice.

Given that their raison d’être is predicated most characteristically on choice, supermarkets are identified as an ideal ground for practicing the Art of Choosing: with floorplans much larger than St Paul’s and imposing aisles loaded with all sort of goods, these modern cathedrals of late-capitalist societies promise the consumer the opportunity to evaluate and choose from a wide range of alternative products. In reality, this flamboyant display of resources is not quite as diverse as it appears at first sight: all goods on offer are mostly from ubiquitously available dominant brands, and the apparent wealth of alternatives is mainly an effect of the endless reduplication of the same products strategically amassed on shelves to reflect and celebrate the opulence of modern society, and thus to encourage unrestrained consumption.

Nevertheless, the Art of Choosing is not concerned with the basic task of deciding between similar products of different brands, but with discriminating among apparently identical items, i.e. with choosing among the individual specimens of the same product of a given brand. The set-up of the supermarket invites the consumer to handle the merchandise, to inspect and compare, to select and reject. The Art of Choosing takes the supermarket’s offer at face value, operating a selection at all levels, down to the individual specimen within a set of identical, mass-produced articles.

On close inspection, specimens in a given set may present visible differences in the form of minor production flaws, or flaws caused by handling/storage, e.g. light scratches, small dents, discolorations, etc. But the most interesting cases are those in which the practitioner is faced with a set of perfect specimens: items that do not exhibit any apparent flaw, a set of effectively identical instances of the same article. It is at this level that the Art of Choosing reaches its highest peak of refinement. With no visible indication of even a minuscule difference, the artist has to rely solely on their intuition for their selection. At this level, the Art acquires a Zen-like quality: the practitioner is forced to go beyond appearances and has to concentrate instead on essence. The most mundane of tasks in the most profane of settings is thus reconfigured as an opportunity to practice heightened awareness. Ordinarily, any of the specimens in a set could be picked up automatically, without much thought and for no other reason that it happens to occupy the front row. But by practicing with awareness and a cultivated sense of discernment the artist acts like a filter through which chance is transmuted into deliberate choice. The logic of mass-production is thus disrupted by an attitude that regards each specimen as unique, and by the performative act that isolates a particular specimen and baptizes it as the chosen exemplar; as Thierry de Duve puts it, “Choice individualizes the object and exempts it symbolically from being the product of a division of labor” (1).

Practicing the Art on humble items of everyday shopping is a way of ensuring that the activity remains focused purely on the act of choosing itself, eliminating any aesthetic, emotional or intellectual involvement with the products. Though the items thus chosen may be exhibited, they are not proposed as some finished products (e.g. as readymades): it is precisely their very insignificance as objects, their status as non-entities, that functions to emphasize the performative process of which they are only a trace. Even their recontextualisation is irrelevant to this operation: the act of choosing — in itself — is all that matters here. The Art of Choosing is just that.
(1) Thierry de Duve, Pictorial Nominalism: On Marcel Duchamp’s Passage from Painting to the Readymade (Minneapolis and Oxford: University of Minnesota Press, 1991), p. 186.
visual // concept // performance