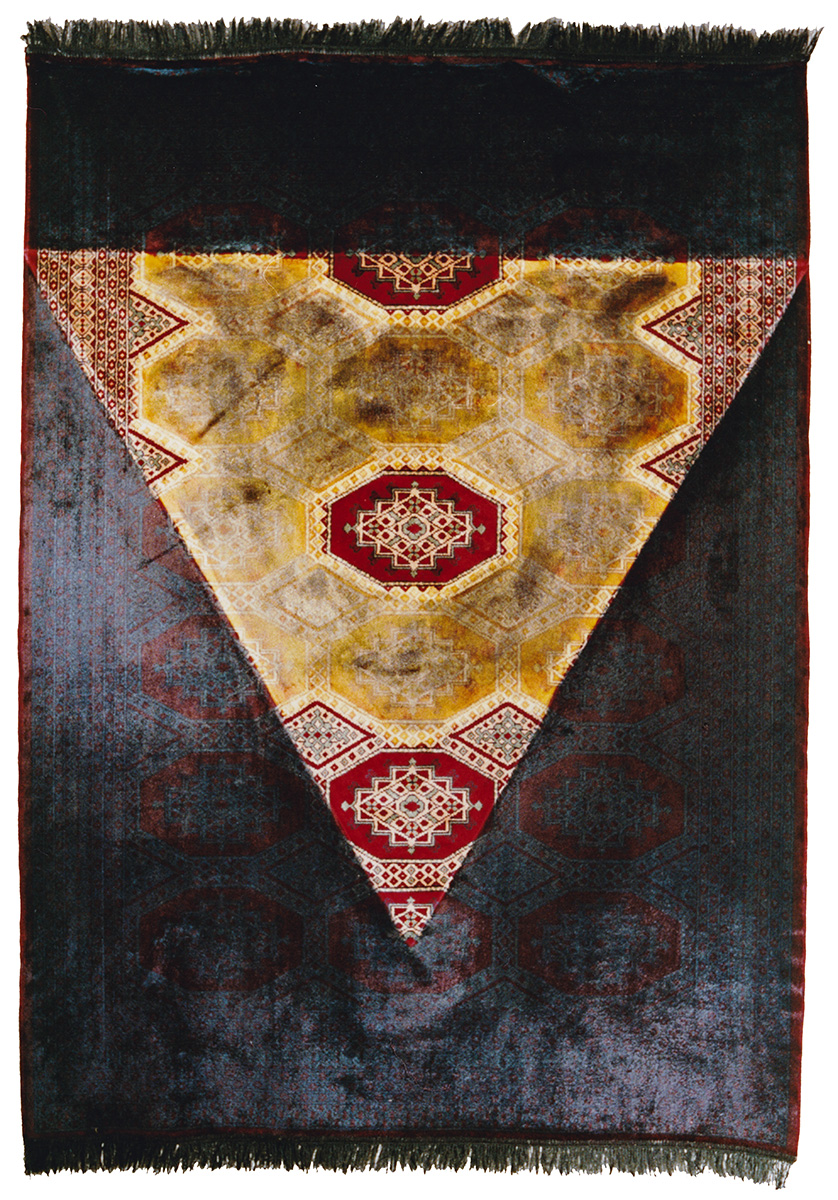 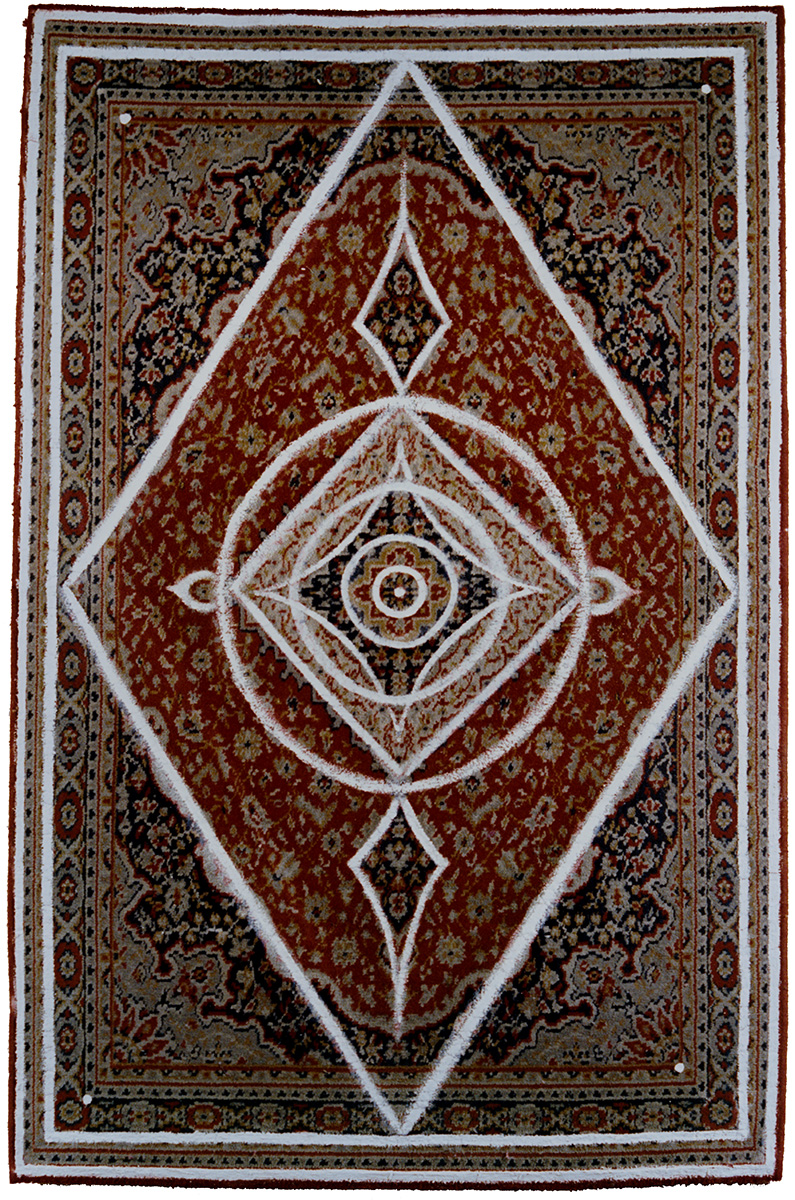 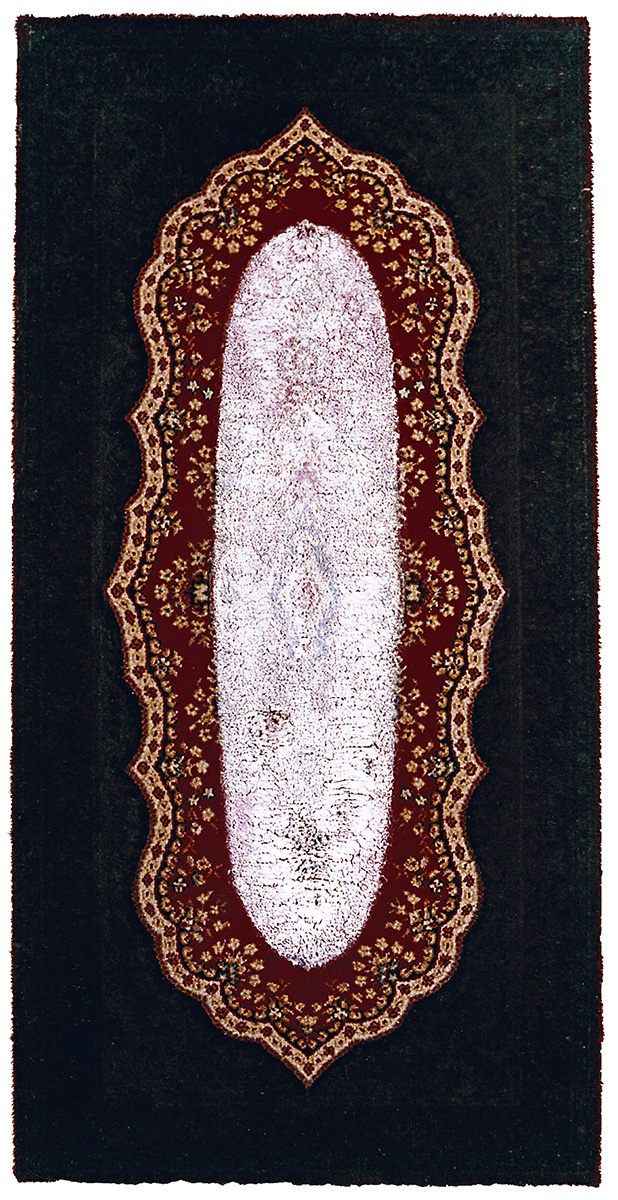 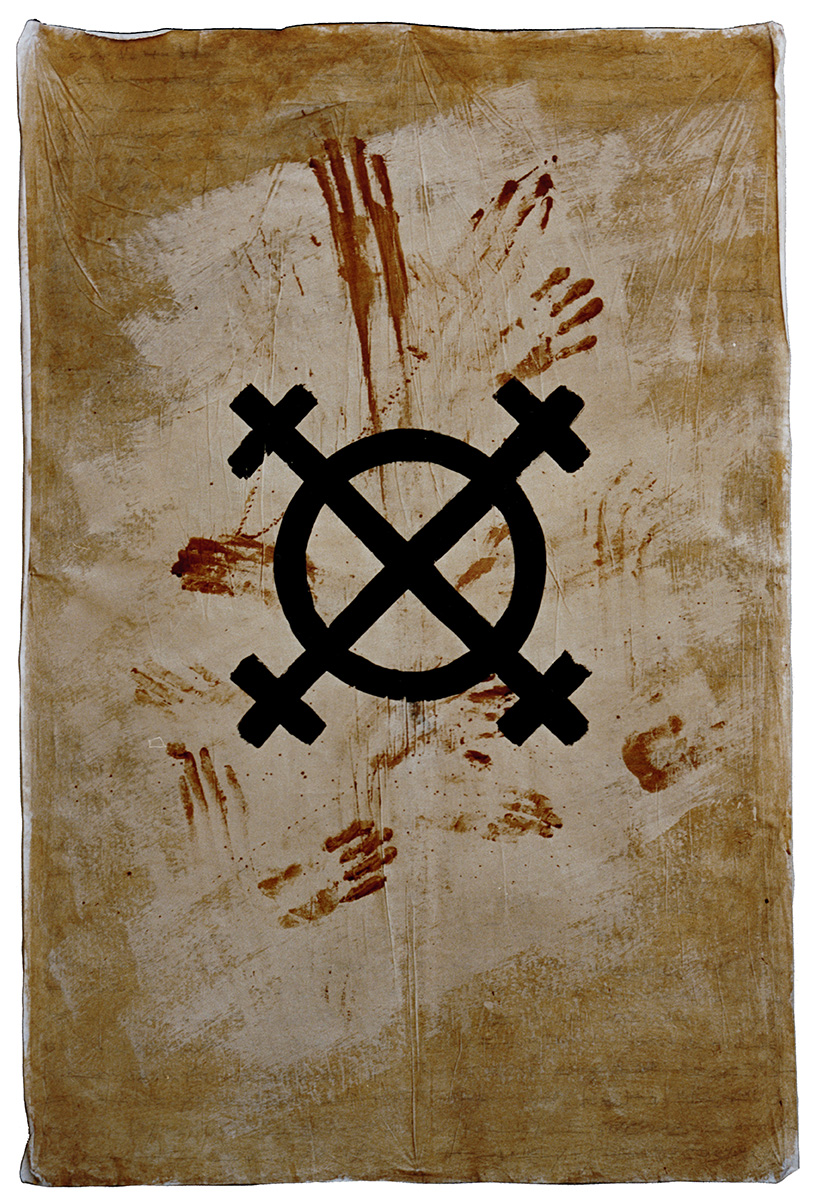 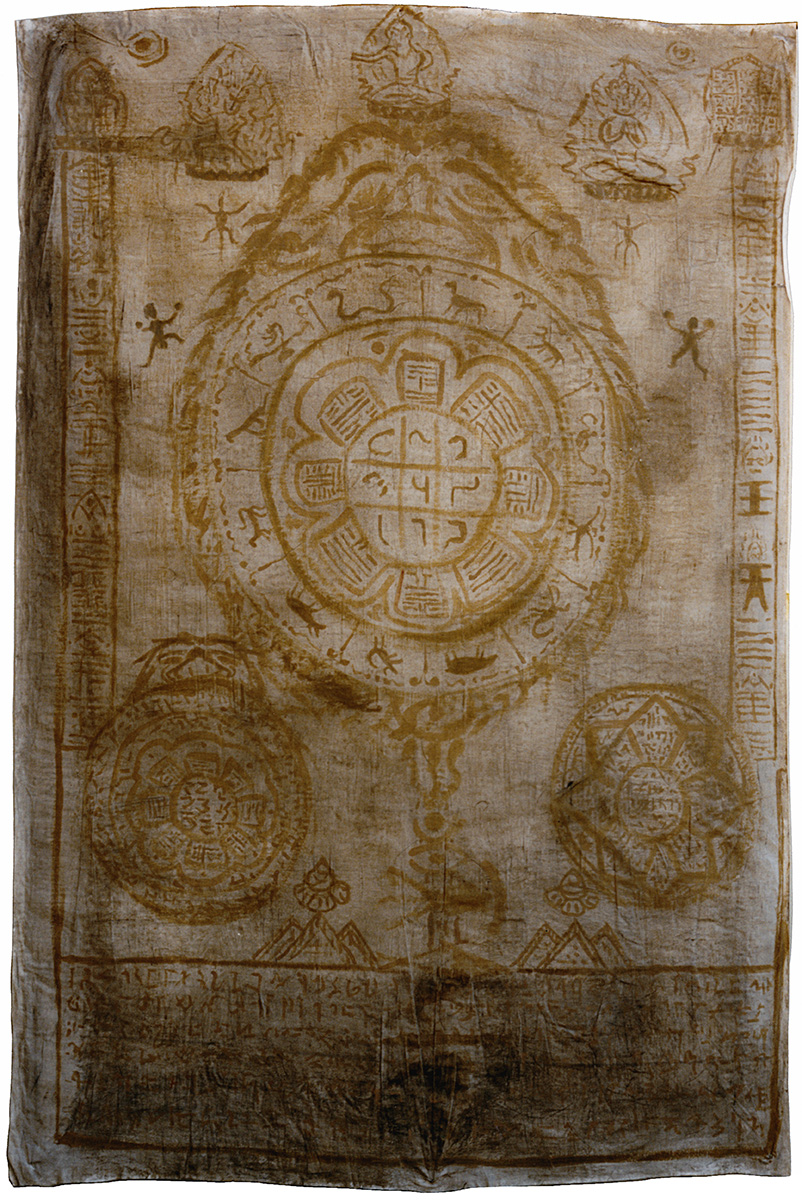 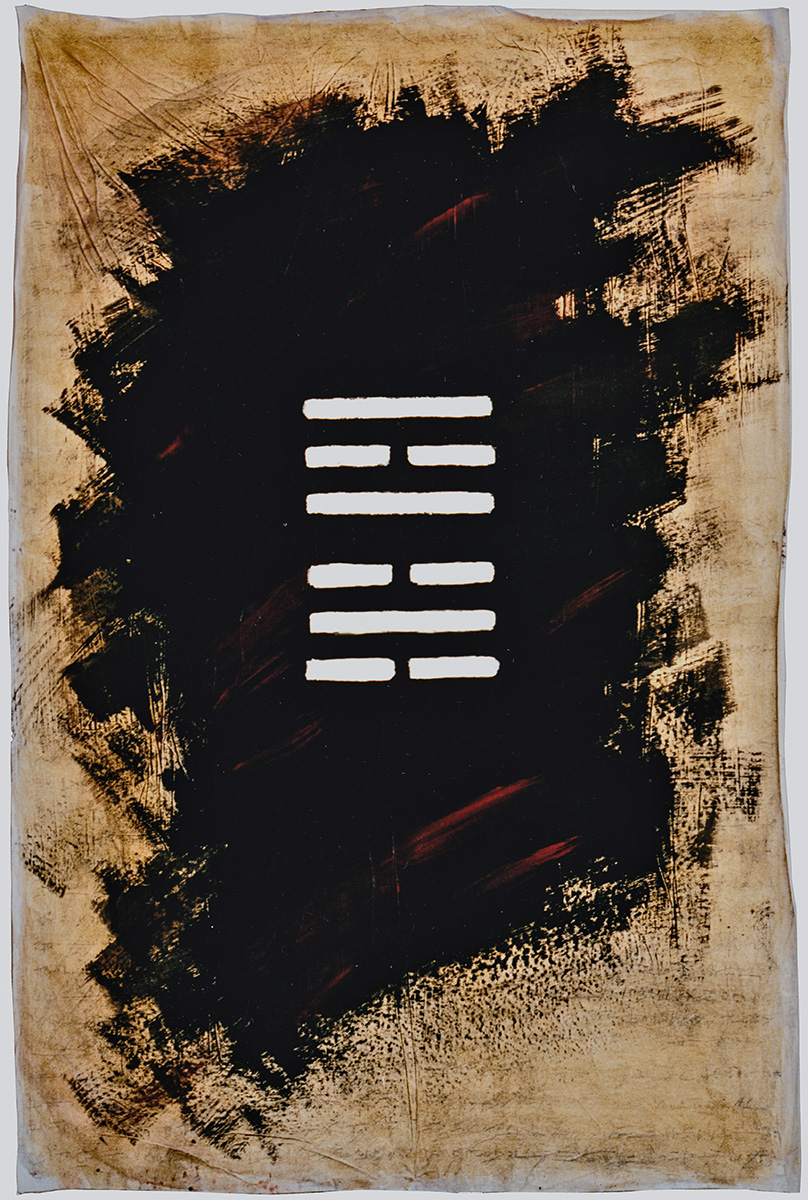 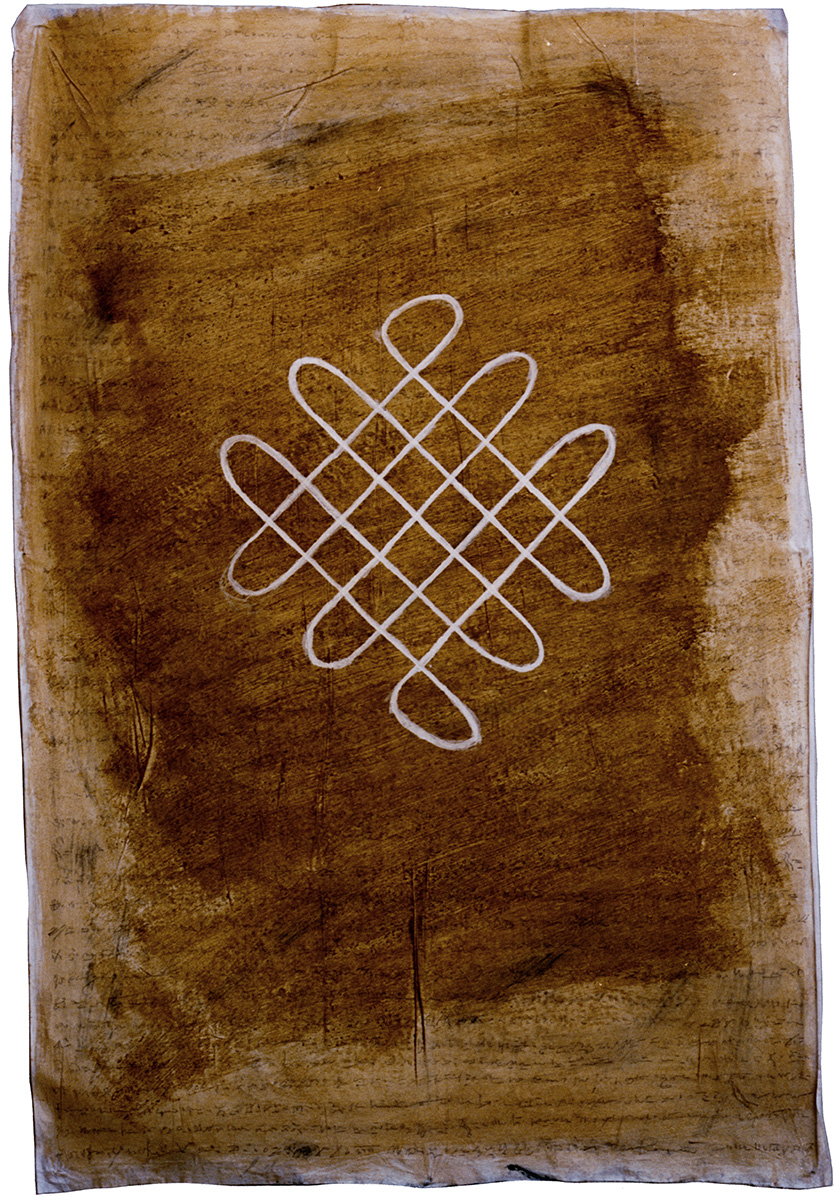 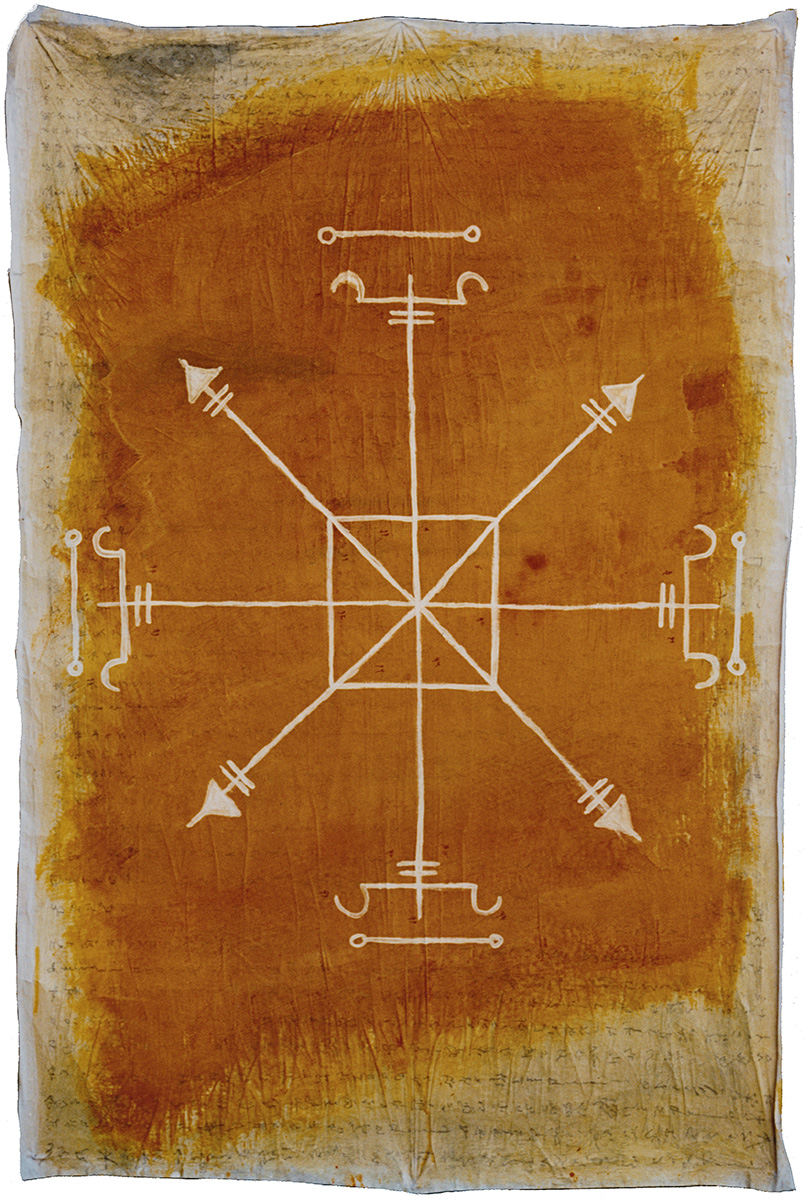 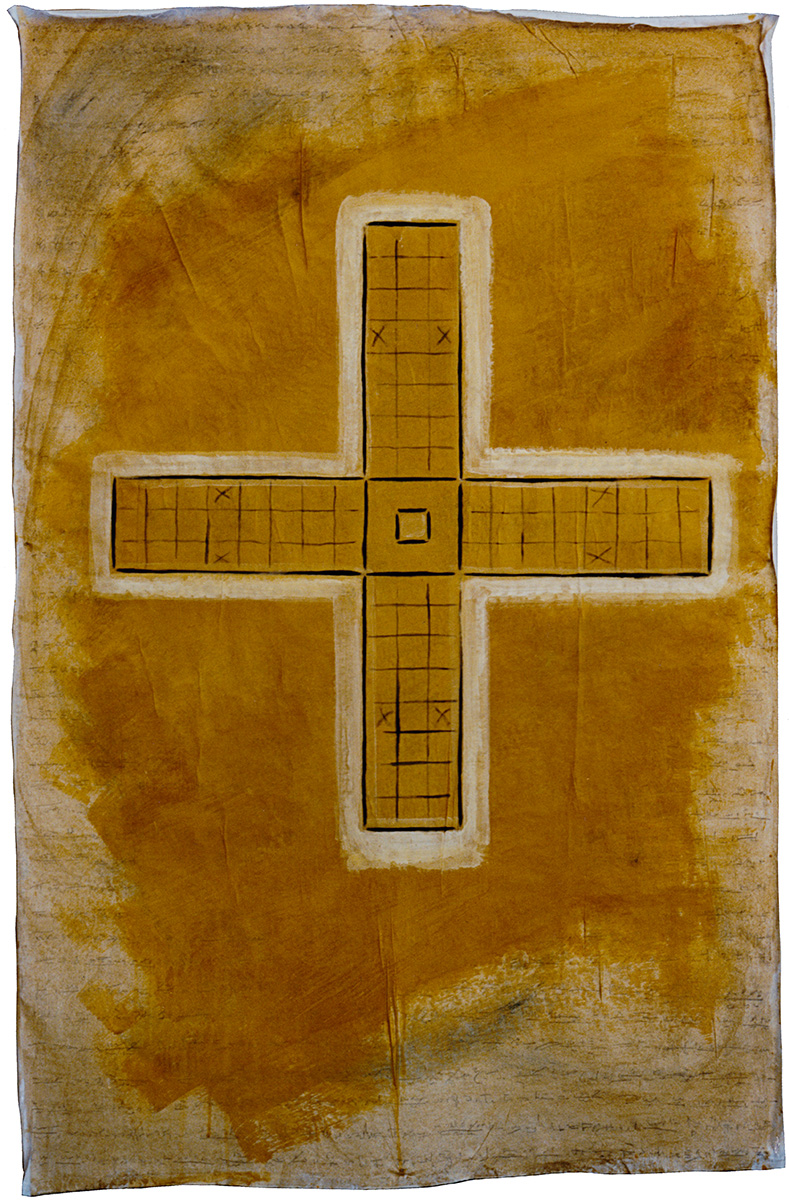 Anima
120 x 305 cm, mixed media on canvas
and sculpted frame (1995)
tantric series
This series explores archetypal signs and ritualised image-making as a cross-cultural phenomenon in which the aesthetic and the sacred interact in complex ways, blurring the line between artistic and spiritual practice.

Here the artist is cast as a shaman engaged in a quest for enlightenment pursued through the creation of artefacts that do not merely reproduce, but effectively actualise force-fields and structured energies that can be channelled to reach higher levels of consciousness.

Following a logic analogous to the one attributed to the cave paintings of primitive humans, in which the hunting scene was visualised and the prey propitiated though symbolic action, mastery over the enigmatic signs is obtained through the ritualised act of tracing and fixing their forms.

The performative aspect is emphasised over the finished product, with the latter acquiring its meaning more as the trace of a process than as a self-supporting object. As a ritualised activity functional to the realisation of a transcendental aim, the act of creation itself acquires a special status, further complicating the relationship between conception and material realisation in art practice.
‍
The selection of materials is invested with an alchemical significance. This is more prominent in the earlier phase in this series, where elements like (the artist's) blood, cow dung, sandal, tea and Indian puja colours are deployed as possessed of esoteric properties.

In the latter phase (Yoni, Mandala, Swayambhu Lingam), the same subject is taken to a higher level of stylisation and abstraction. Even more significant, this phase marks a radical shift in my approach to practice, which starts to be more concerned with transforming existing objects, rather than creating from raw materials. In that respect, the operation becomes more akin to sculpture than painting, more concerned with subtraction than addition. Rather than being imposed from the outside, the subject is negotiated within the patterns of the pre-existing artefact, exploiting existing features to reveal a hidden underlying structure seemingly waiting to be discovered and brought to light. The goal here is to achieve a radical transformation through a limited intervention.

This preoccupation with recycling, sampling, and transforming finished products will eventually become a constant in my later and current work, which takes my engagement with the sacred in art into an expanded and increasingly conceptualised semantic field.
visual // concept // performance